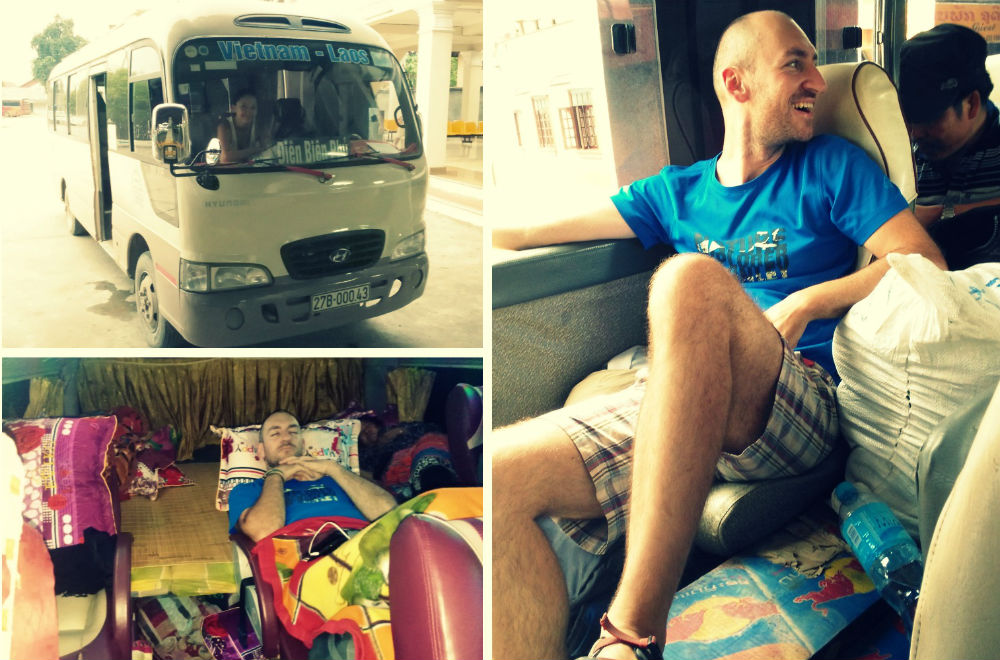 Transport
How to get from Luang Prabang to Sapa
November 9, 2015 By FromOfficeToBeach
2

there are 3 ways how to get from Luang Prabang to Sapa:

We chose the second option the less expensive and crazy one as you can read below.

After almost one week in Luang Prabang we decided to move to Sapa, Vietnam (for details about Vietnam Visa click here). There are plenty of places to buy ticket for Sapa, either in agencies on main road near night market or directly in most of hostels in the center.  Hostels sell minivan ticket for 240 000 KIP. We decided to get Vietnamese bus for 210 000 leaving from Southern bus station. We bought ticket in local office for 210 000 KIP (around 25$) including tuk tuk to bus station at 6 a.m. The journey takes 12 hours which is less than 14 with minivan option. In the morning we got to bus station where small bus was waiting. 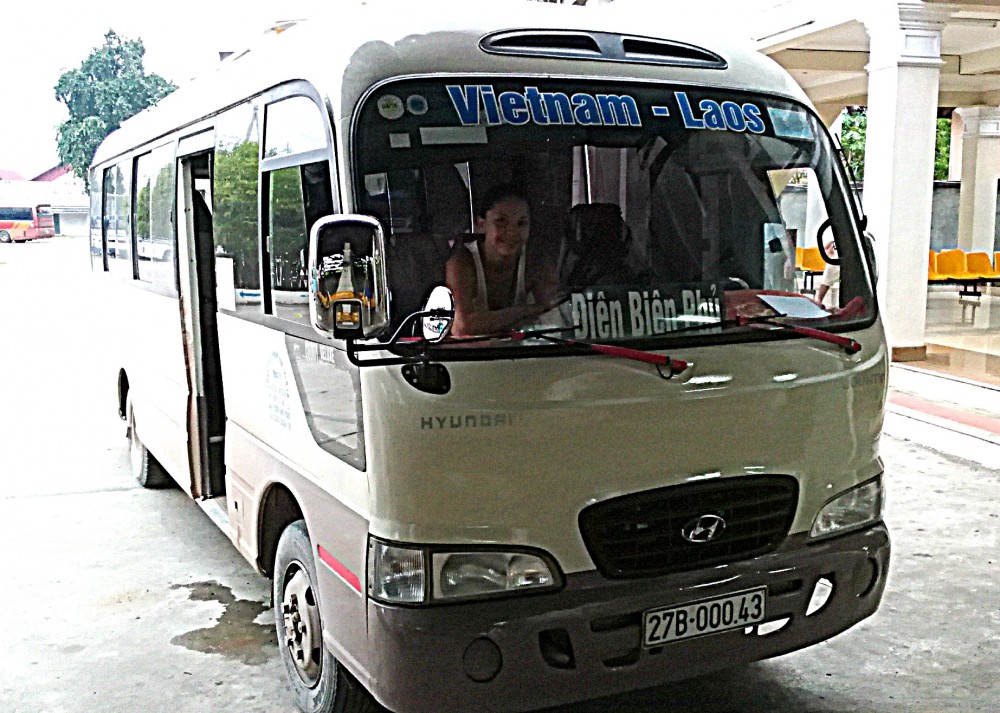 We took our seats had a chat with to girls from Israel who traveled the same way to Sapa and the journey could begin. After hard mountain ride we had a lunch stop at Muay Xai where all fun began. Along the way other people were jumping in and out in nameless villages. We were happy that minibus was not fully booked. But not for a long time.. Vietnamese know how to fill unused (even used) space in the minibus and we loaded almost entrire market into the minibus. When the trunk was full they started to load cabin with other bags and suddenly passenger bus converted to lorry. 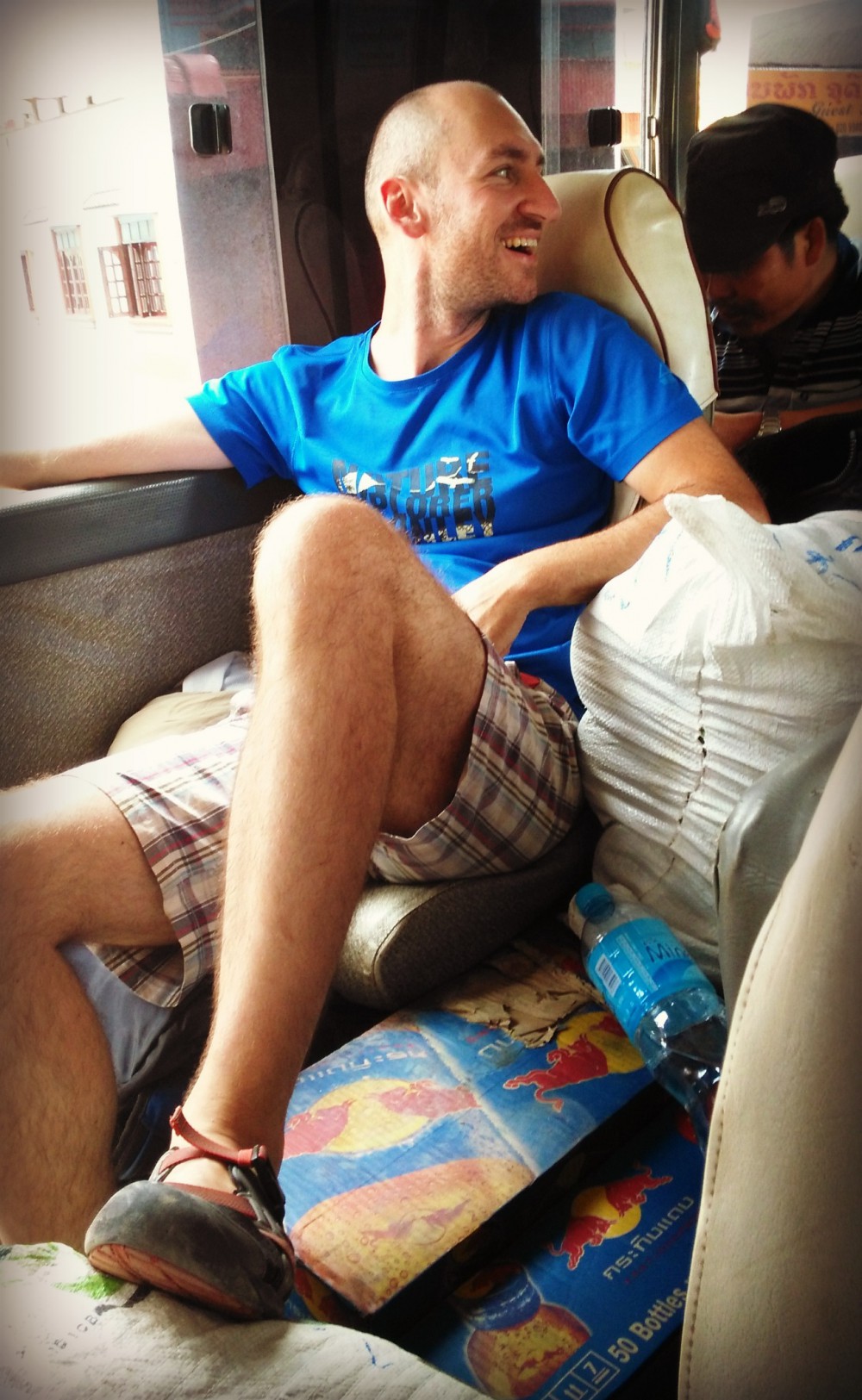 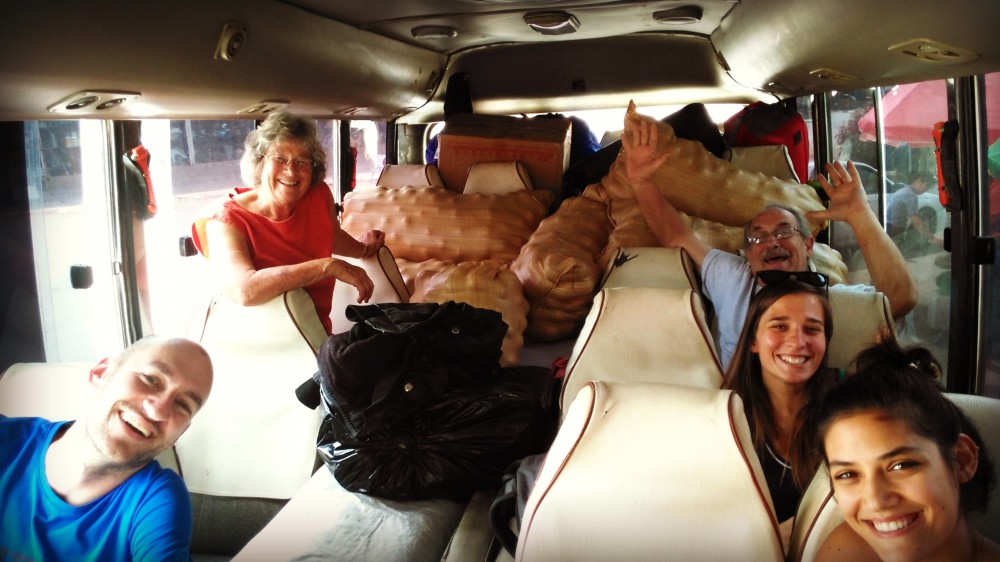 At the begining it was fun but when we complained the driver got rude and aggressive when we complained against loading more and more staff to cabin. So they started loading the roof till it was full 🙂 Around 4 p.m. we arrived at Laos border. After quick passport control around we continued to Vietnamese border where the immigration process took little bit longer because officers used only paper and pen. 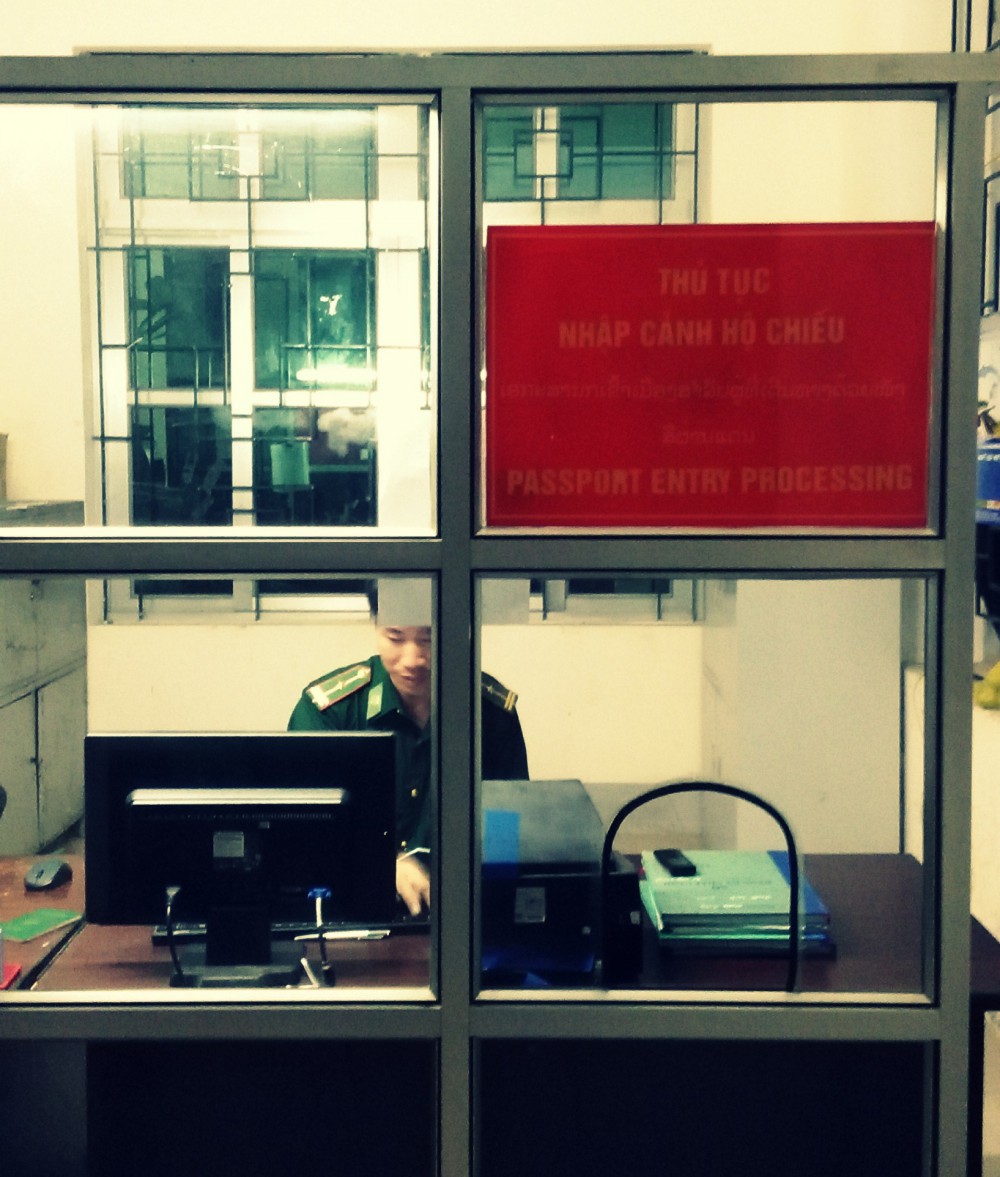 After 30 minutes we were good to go to Dien Bien Phu which is aprox. 40 minutes ride from the border. Exhausted and with stomachs flipped upside down and with very bad feeling about vietnamese drivers we arrived around 6 p.m. to Dien Bien Phu bus station. There was no bus to Sapa, the last one leave 17:30 so we unsuspecting any problems bought tickets for sleeping bus for 210 000 Dong and found nearby hostel to sleep over. Welcome to Vietnam. 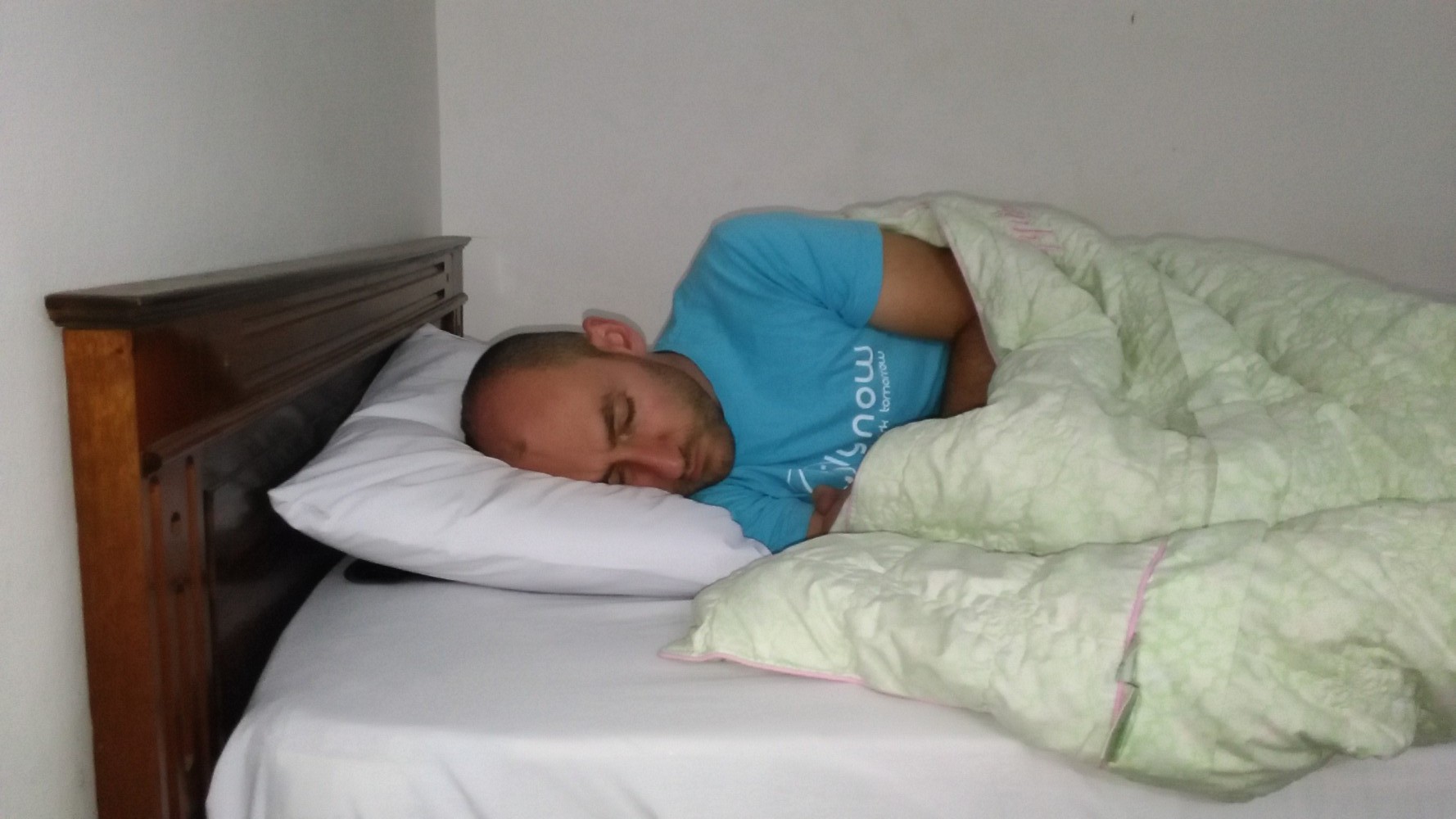 Next day we walked trough the city. There is honestly nothing to see and no reason to stay there if you don´t have to. So we prepared our stomachs for other mountain drive and at 5:30 p.m. we left for Sapa. But again it wasn’t so smooth as we expected. There are less seats in sleeping than in normal bus so they sell the best seats to Vietnamese and then for tourist. So when they told us to take a seat at the back of the bus on sort of wooden floor we again complained. Finally after some arguing, drivers told some vietnameses to leave seats for us and move on that wooden floor. And pissed off we were ready to continue with even worse meaning about Vietnamese companies and drivers then before. We should had been in Sapa around 6 a.m. so even the driver drove like a crazy we got some sleep during a way. 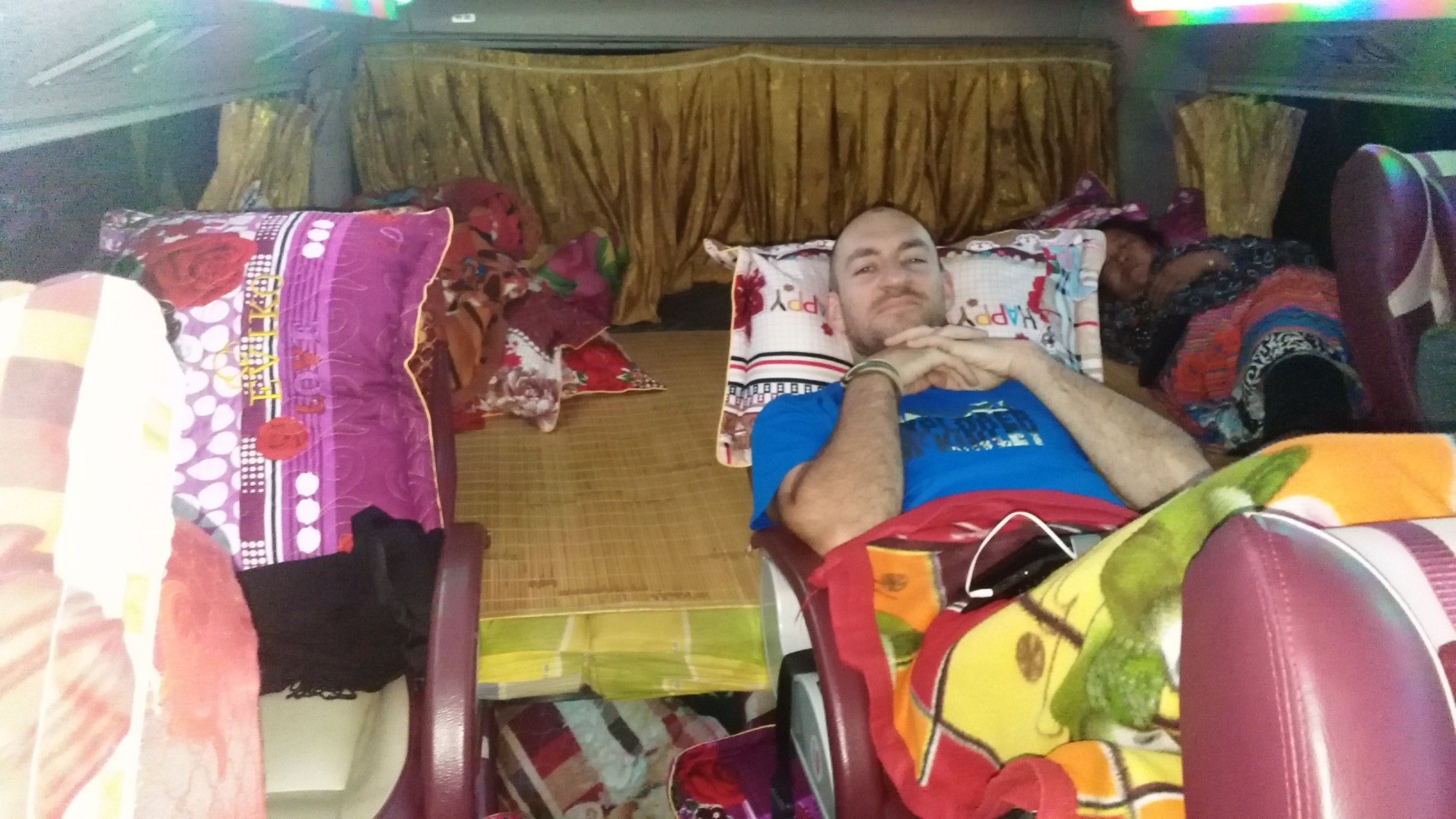 Suddenly drivers voice screaming Sapa,Sapa woke us up. It was half past 3 in the morning and we all still half asleep jumped out from the bus. It was raining with freezing temparature around 13 degrees. What a cold reception from rice kingdom. The drivers obviously was driving like a crazy as we arrived almost 3 hours earlier than planned. As we later found out taking sleeping bus on that road during night was very dangerous so we will try to never repeat it again. On the street they were guys already waiting and trying to sell us accomodation for crazy prices. We better jumped in to the taxi and left to Mountain View hostel where we unfortunately could check in at 6 a.m. but they offered us carpet in common area to get some sleep and wait till morning. 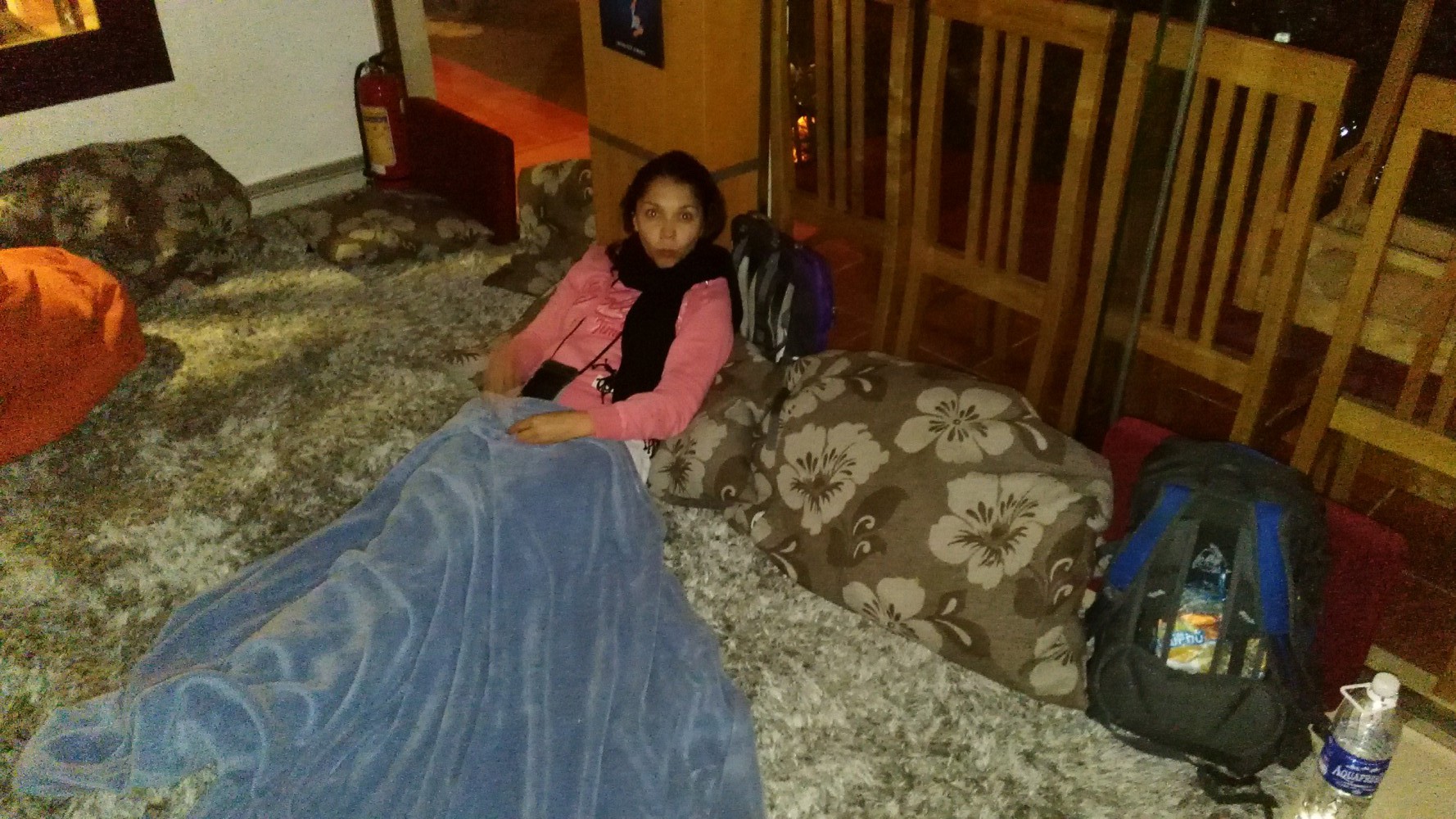 But after that things started to turn for better. To read more what we did and see in Sapa click here. Welcome to Sapa 🙂